What Motherhood Has Taught Me….

A mom shares lessons learned as she juggles her family and career….

When you become part of the magic…

Last year when my son was 12 we had to break the truth to him regarding Santa Claus.  My husband, his stepfather, couldn’t believe that he actually still believed but knowing my son and the gentle soul that he is, I knew that he believed whole-heartedly in Santa.  But 12 year old kids can be cruel and when some of his classmates found out he still believed in Santa Claus they mocked him and made fun of him.   Thus we had no choice but to tell him the truth.  A truth which ironically he still didn’t want to acknowledge and chose not to last season.

As this holiday season approached he looked at me with wariness in his eye.  He asked me the truth and I offered him this heartfelt explanation.  I told my sweet, innocent first born child that what you chose to believe in your heart is what makes something real.  And that the magic of this season is as real as it can be when you make it about bringing joy to others, being selfless, and showing compassion and love.  I told him that now that he knows the secret behind the magic, he is now an important part of creating it and keeping it alive for his brother and sister.  He was upset as the realization of what he was fighting to not acknowledge now sank in.  He had a million questions as to how I did certain things.  However I told him that I still have my secrets, smiled and gave him a hug.  After all, he doesn’t need to know everything…. 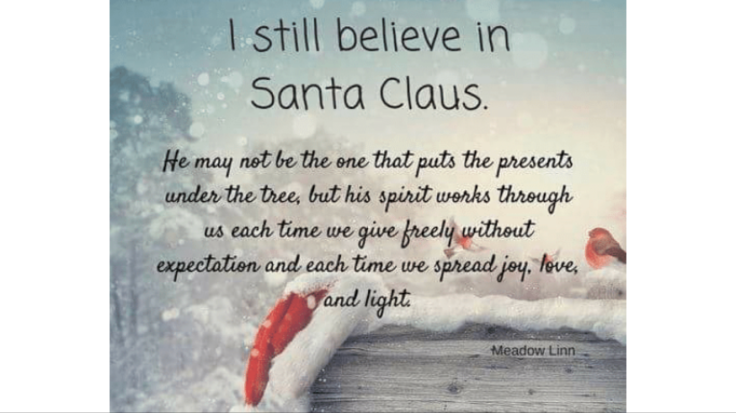 I am a mom to three awesome kids. They are my pride and joy, even when they manage to push my sanity to and often over the proverbial edge. They are my greatest achievements and I love watching them grow and come into their own selves. While I am married, ours is a blended family which is not without its challenges and stressors. It's that whole yours, mine and ours concept... A few years ago I went back to work full-time as a nurse. I love what I do, and I would like to think that after all this time I am very good at my job. Connecting with people at their most vulnerable and helping them heal, brings me a sense of purpose and gives meaning to what I do. I secretly have always had a passion for writing. When I started this blog I did so as a way to be able to express myself through my words; and hopefully inspire others through my life experiences as both a mom and a nurse. To be able to adequately convey just the right amount of my life experience, mixed with a little bit of humor, some impassioned views, some heartfelt emotion, and of course lessons learned, and in turn inspire others would be an awesome experience and privilege. Making sense out of chaos, finding silence amongst the noise, and locating solace during turmoil....its my blog that I am hoping will be my beacon and offer me light on my path.